Banneux: Book your holiday home and visit the country

Banneux is a special little place and a part of the municipality of Sprimont, in the province of Liège. Small, but one of the most visited places in the south of the country. Banneux is very well known for the pilgrimage: thousands of religious come to visit this place each year, because the Virgin Mary appeared there in the 1930s. The area is also famous for its wildlife parks, caves, castles and museums. Furthermore, Banneux is located less than a 40 minutes' drive from Malmedy, perhaps one of the most beautiful places in the Belgian Ardennes.

What used to be a small village in the Belgian province of Liège – and actually still is – is now the most important place of pilgrimage in the country. Every year more than half a million people come visit the village of Banneux Notre-Dame, part of the municipality of Sprimont. They are looking to recover their health, seek spiritual strength and guidance to overcome life’s major obstacles, pray for peace or just want to have a look around.

But first a bit of history...

15 January 1933. Mariette Beco sits at her house’s kitchen window sill in Banneux, Sprimont. At eleven, she is the oldest of seven children. While she waits for her little brother a Lady appears in the garden. It’s the Virgin Mary. She introduces herself as the Virgin of the Poor and appears on seven more occasions during the next month and a half. She will be praying for the poor and ease the suffering of each. Mary tells Mariette to do the same. After the eighth apparition, the Virgin of the Poor says goodbye for one last time.

Banneux Notre-Dame would never be the same again. News about the apparition of the Virgin Mary spread all over the world. The small, quiet village quickly began to attract pilgrims. Banneux was officially recognized by the Vatican as a place of pilgrimage and even Pope John Paul II visited the shrine in the 1980s.

During World War II many Jewish children – and adults – were provided shelter in the Banneux monastery. Endangering his own life Monseigneur Louis Kerkhofs – among others – provided refuge to many Jews who otherwise would have been deported and killed.

Banneux is now a world famous place of pilgrimage in the small municipality of Sprimont, at the edge of the Belgian Ardennes. Crowds are impressive during the month of August because of the The Assumption. Other times of year (July is a calm month) the domain is a place of peace and quiet and a delightful place for a serene walk. On the domain you will find the Holy Spring, the Chapel of the Apparition (and many others), a big church, many statues of the Virgin Mary, a large altar at the far end of the esplanade...

The personnel at the Office du Tourisme de Sprimont-Banneux N-D. (Tourist Information Centre) will very politely answer all visitors’ questions. They point you into the right direction when you are looking for any further information. Furthermore, there are many books, brochures and souvenirs for sale.

Mariette Beco passed away in December 2011. The woman who witnessed the apparition of the Virgin Mary when she was 11 years old led her life outside the spotlights, got married and had three children. She died on 2 December in the retirement home in the village of Banneux Notre-Dame. 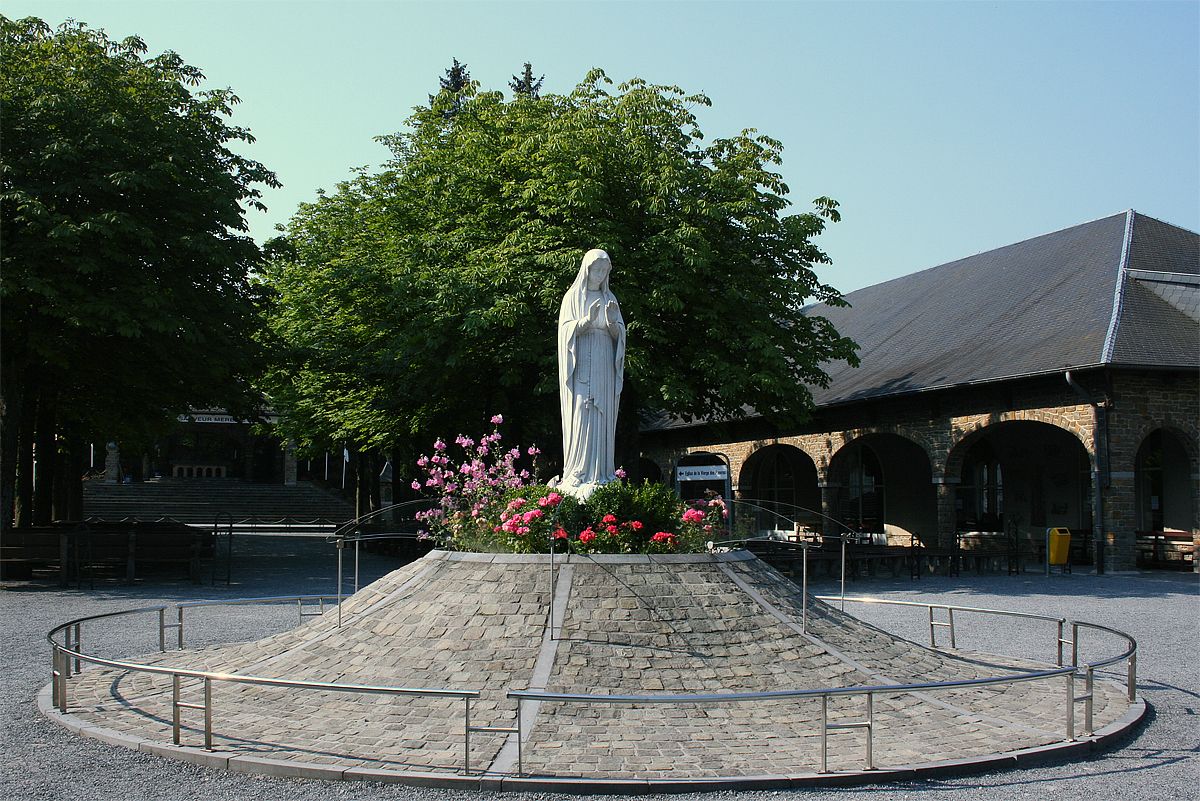