3 spacewalks to discover with your children! 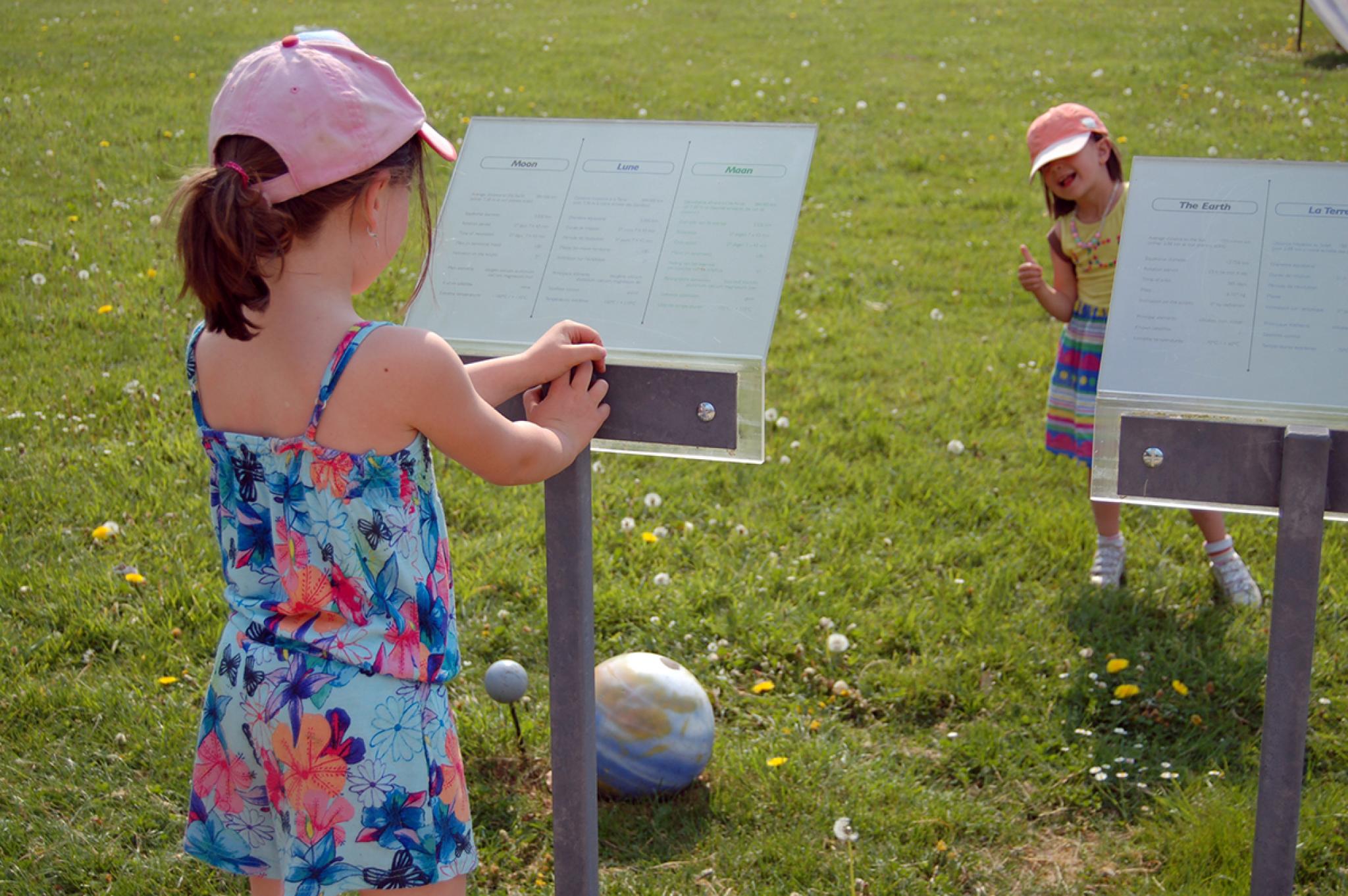 3 spacewalks to discover with your children!

Hang on tight and embark on a mission to the Moon and all the planets with your kids! In this article, you will discover 3 spacewalks to experience with your little adventurers in the region of Redu, in the Ardennes. These Informative and fun walks will entertain young and old!

From the Euro Space Center

A day into space in Redu, in the Ardennes

On a Wednesday in May, we decide with my friend to take her daughters away from the paths that we usually walk on around Theux. This time, we are going on an excursion to explore space. For several weeks, Noélia, the eldest of her daughters (aged 6) tells us about what Madame Sabine taught her in school about the solar system and its eight planets that revolve around the Sun. So we wanted to try a new walk together this time, more original and informative, revolving around the theme of space. I was a little apprehensive about this trip because we had some way to go and with all the road work and detours that always start in spring, the road could be long with two children. But some games and songs later, we arrived in the region of Libin. The trip went well and the girls were excited! As soon as we parked the car on the parking lot of the Euro Space Center, Noélia and her little sister, my goddaughter Elisa (aged 4), opened the door and immediately spotted the planets arranged along the way. The weather was nice, the sun was shining and the wind was gentle. It was an ideal time to start our visit outside. So we let the girls guide us and the four of us hovered around the solar system. 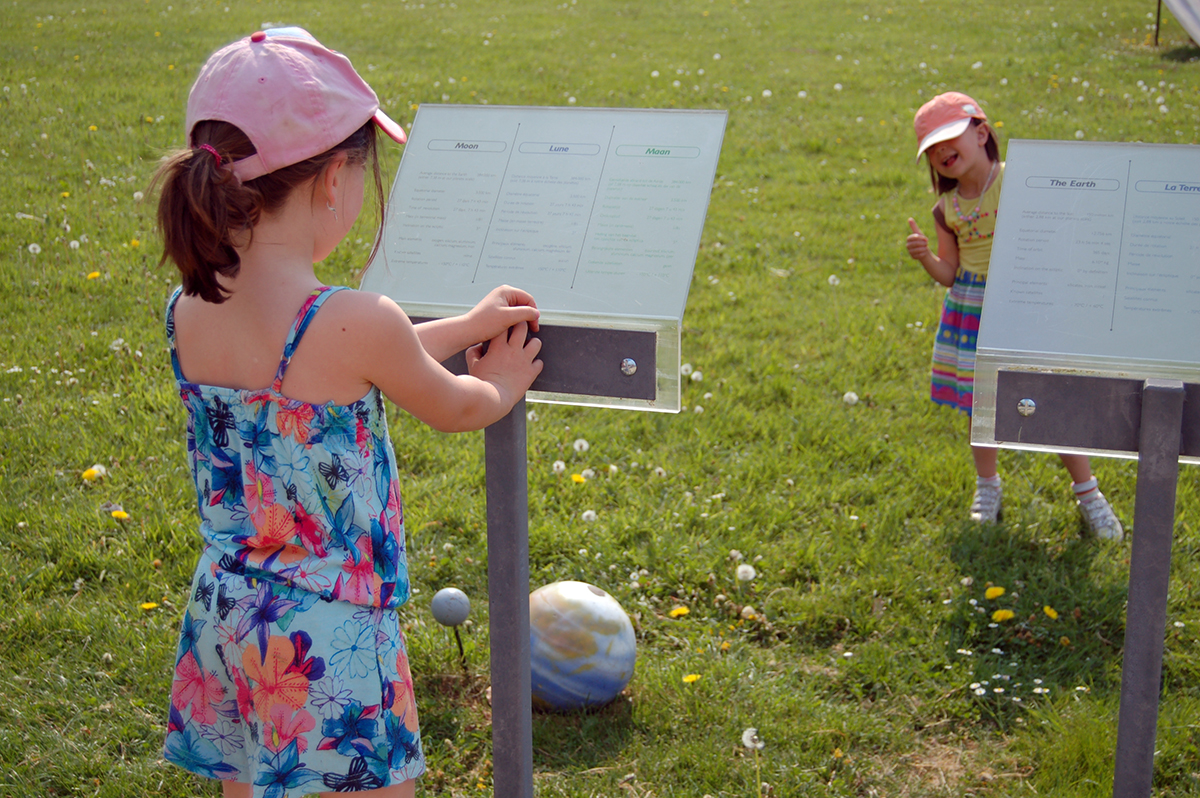 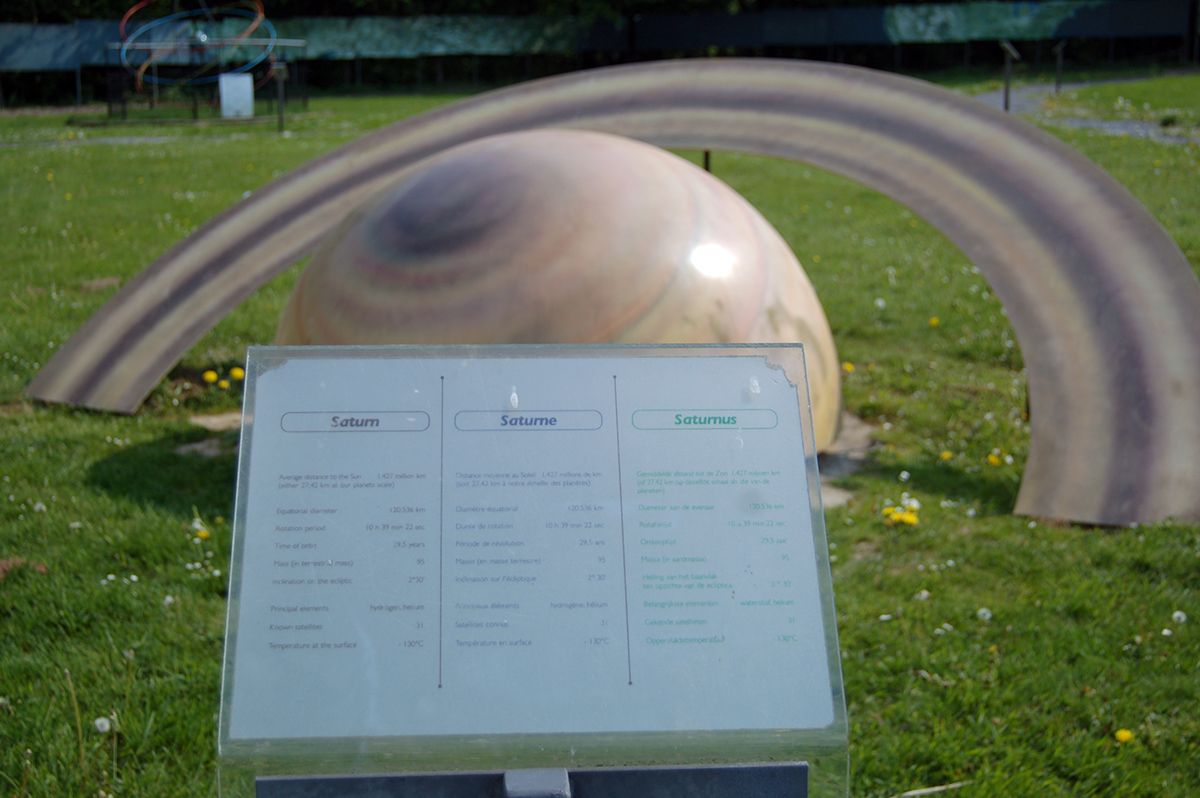 A walk in the solar system

First, we went to see the planets of the solar system, just in front of the first car park of the Euro Space Center. Noelia immediately recognized Saturn, thanks to its rings. Her sister followed her and Noelia told her everything that Madame Sabine had explained to her at school! From the Sun, we strolled between Mercury, Venus, Earth and Mars (the four rocky planets) and then, a little further, we saw the four gas planets, Jupiter (the largest), Saturn, Noelia’s favourite, Uranus and Neptune. Here, everything has been built to scale. This small journey between the planets of our solar system allowed us to better understand the small place we occupy in the Universe and it also made us hungry. It was already time for lunch! After eating some almonds and some fruit we left for the 6 km spacewalk that starts right at the entrance of the car park. 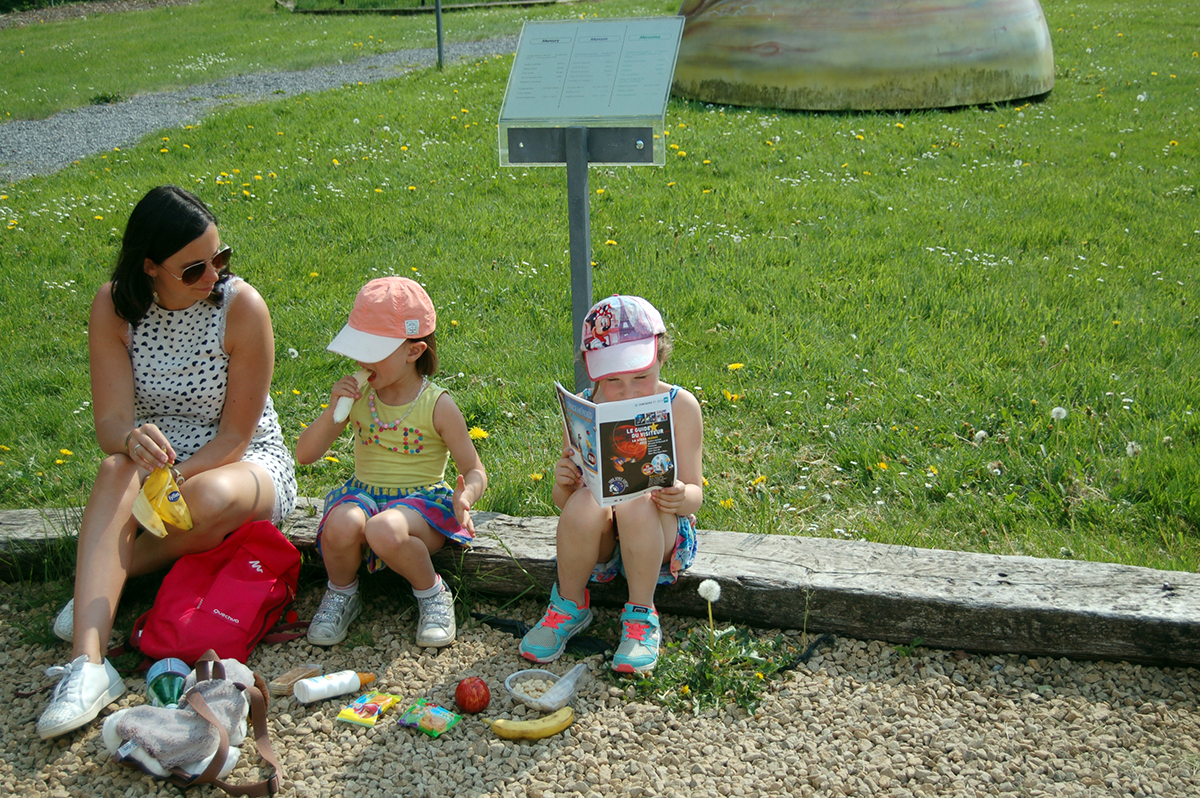 Since a thunderstorm was expected for the end of the day, we chose to walk outside before exploring all the indoor activities of the Euro Space Center. So we went for the 6 km hike. This loop through woods, meadows, high forests, and fir stands was perfect for Noelia, who has the habit of dancing during hikes! My goddaughter Elisa, also walked like a boss the 6 km (or almost) and without moaning. She was our guide, always the first, looking for white arrows on yellow squares and for wooden sculptures! (I think she’s ready to start dancing, too!). During our walk, we met Hermes, the guardian of roads and crossroads, as well as some of his companions of Greek and Roman mythology. Hermes was equated with Mercury among the Romans. 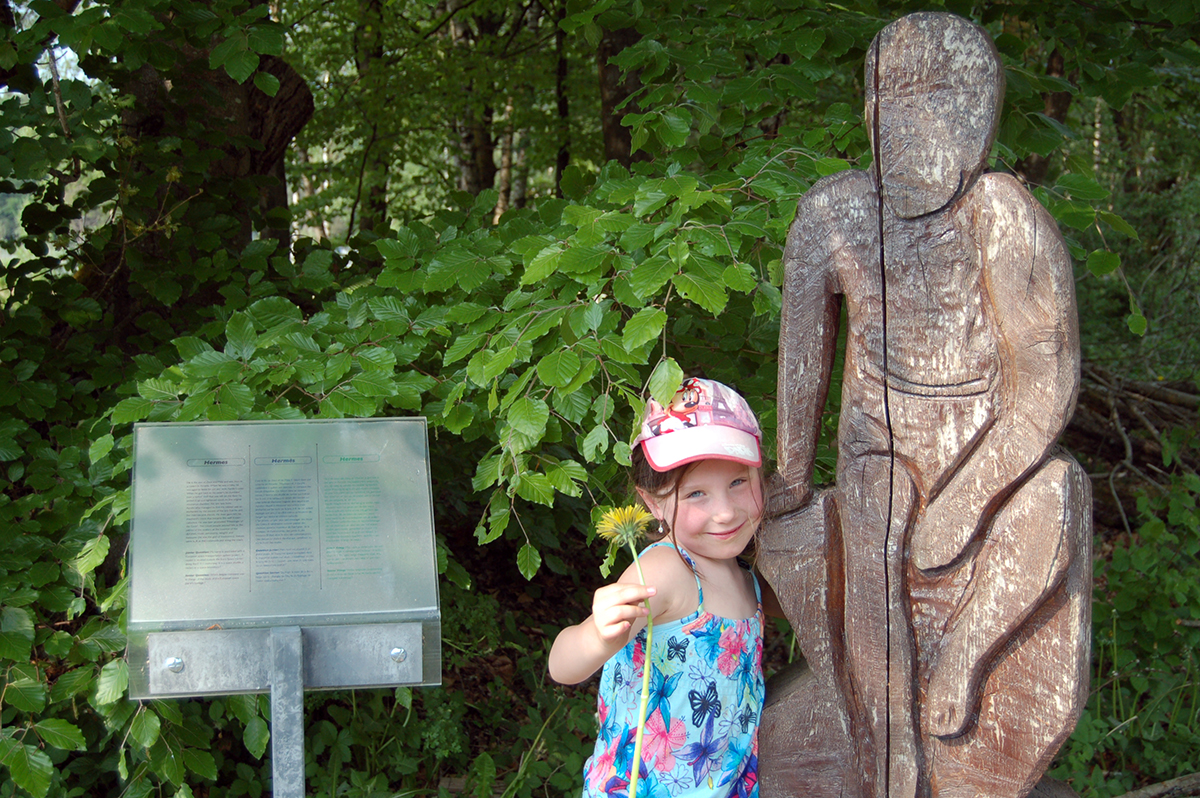 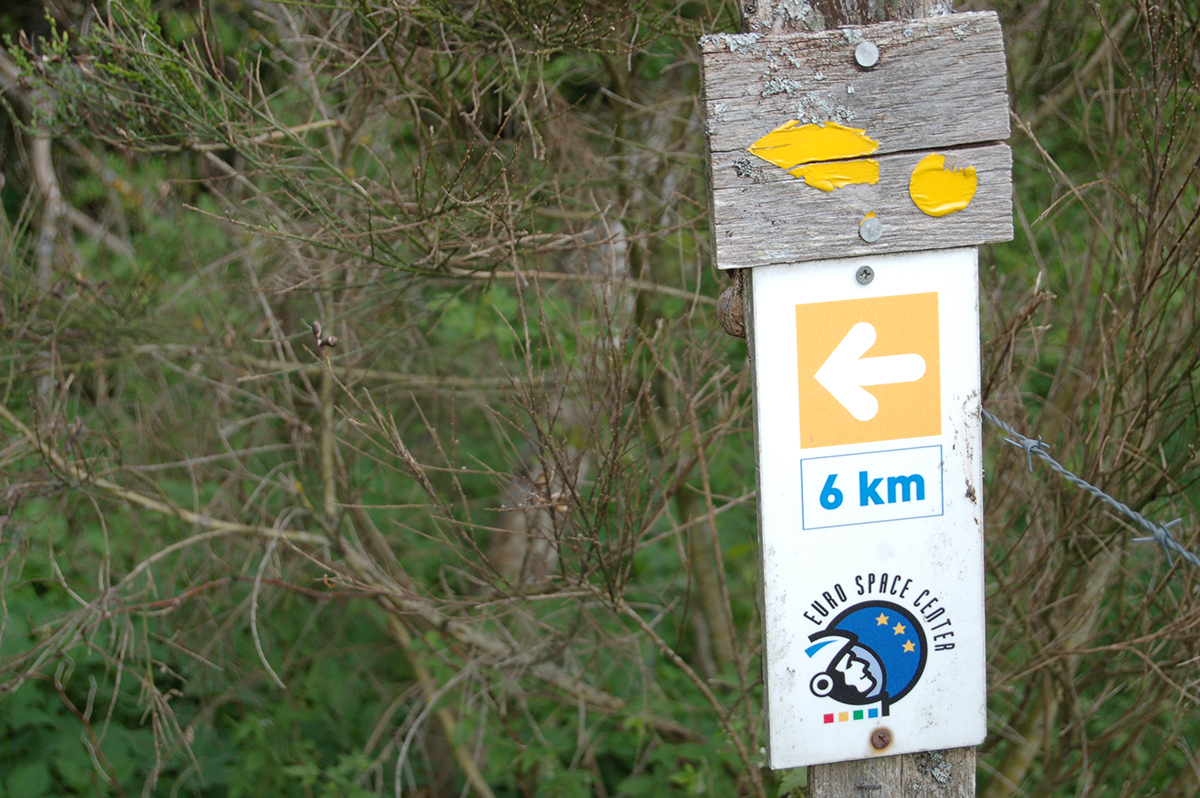 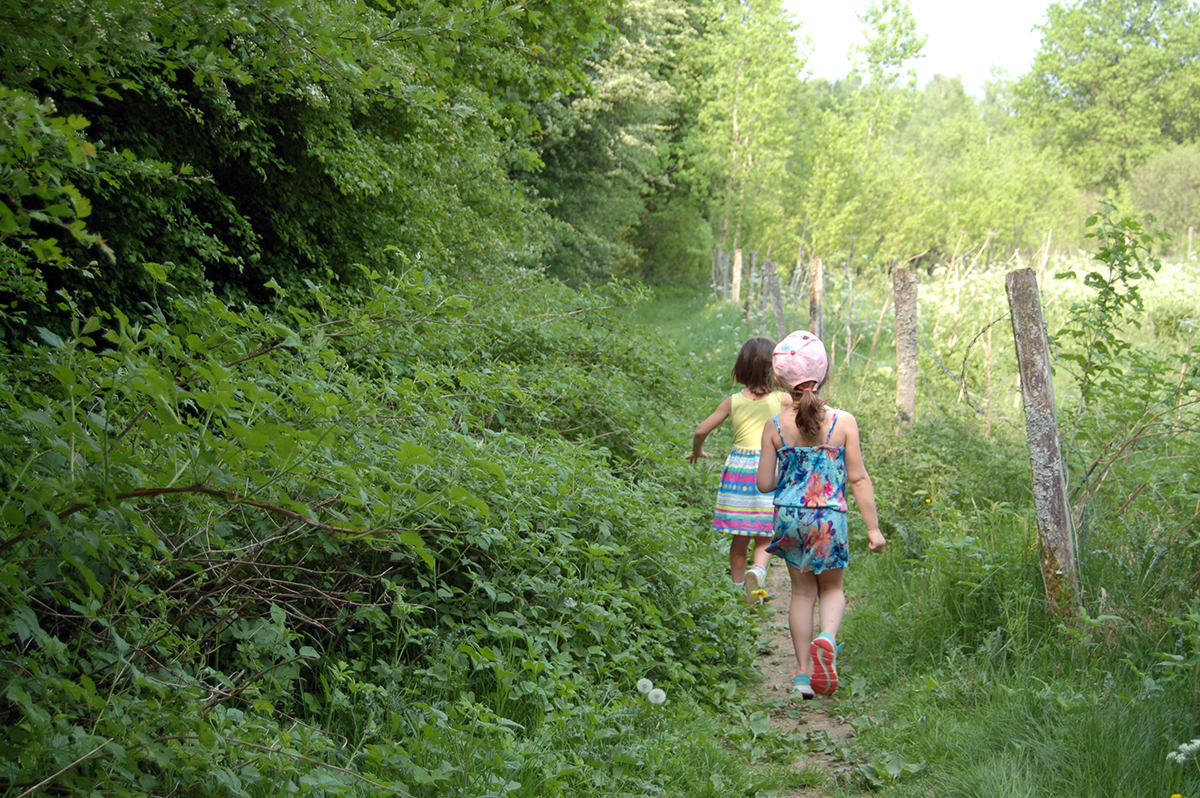 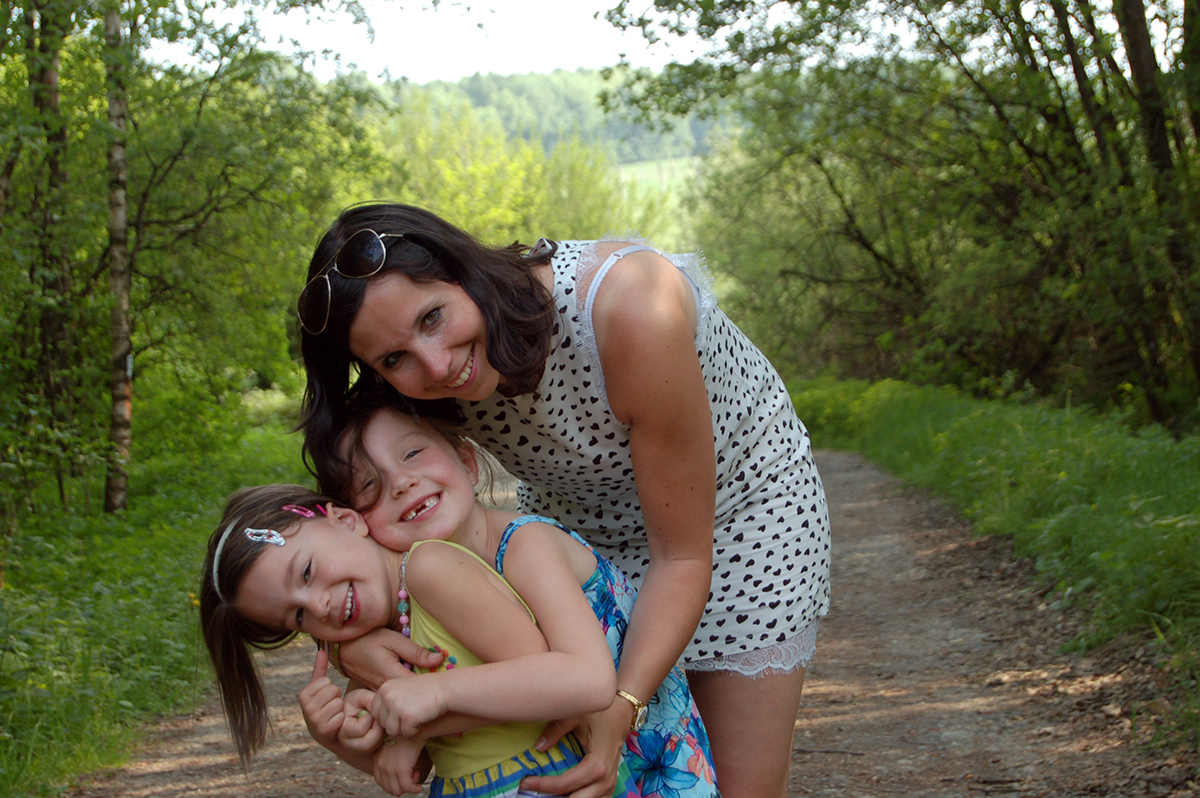 This fun and easy walk is accessible to all children (however, buggies are not recommended). For the youngest, under 3 years old, it is best to bring a hiking baby carrier. And do not forget that walking can make you hungry, so bring a picnic or a snack to eat during the walk (ours was devoured in 5 minutes), water and, if the sun is strong, a hat and sun protection. 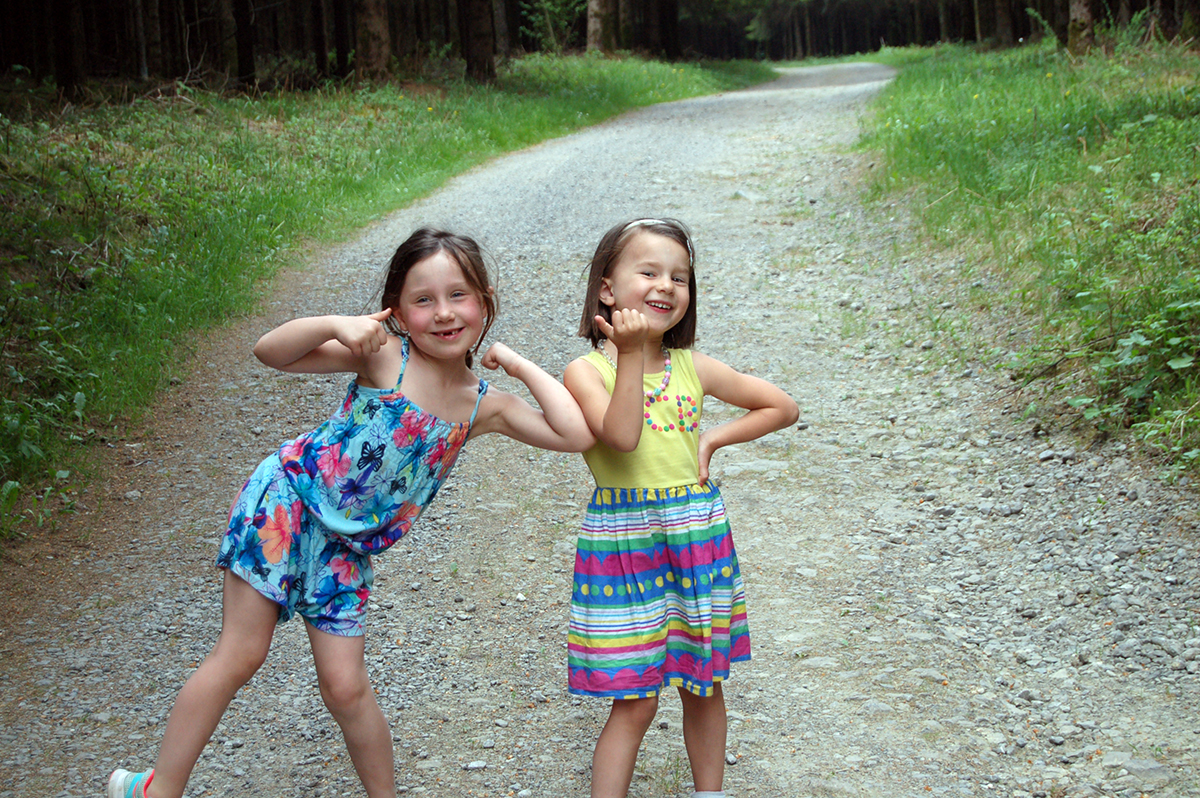 In the Ardennes, the weather can be unpredictable! That afternoon, the first drops fell a little earlier than expected, but luckily we were at the end of the walk. After saying goodbye to Orion, the last wooden sculpture, we decided to go inside and find some shelter from the rain. At the entrance of the Euro Space Center, the girls wanted to climb on the scale to know their weight on the different planets! Noelia weighed 3.4 kg on the Moon! After taking a selfie with the astronaut, we went for a shaking experience of dynamic cinema… With our 3D glasses on, I can tell you that this trip to the Moon made us vibrate! We then went on with the show, but we, unfortunately, had to cut it short… In the first room, Elisa was not reassured and asked me « are there any bad guys here? ». Because of the dark and light effects in the second room (which were very well-made), she was frightened and we had to go out after the third room. I did not think that this show could be scary for a 4-year-old girl. But maybe it was also due to the fatigue of the day!

Some steps on the Moon

After we returned to the main hall, Noelia, my friend and I (Elisa was too small for this activity, which requires a minimum age of 6) were able to take a few steps on the Moon and on Mars. I went first so that Noelia could understand how to do it. She is a curious little girl, but she needs reassurance. Taken by her mom’s hand, the first two steps were enough to put her at ease. She then dropped and got fully immersed into the landscape she saw in her helmet. She walked slowly and lightly on the Moon and did not want to stop! She also took a few steps on Mars, in a landscape that was very different from that of the moon, rockier, redder, but very pretty. She wanted to start over again and again… I think she enjoyed this experience and will tell all about it at school tomorrow! 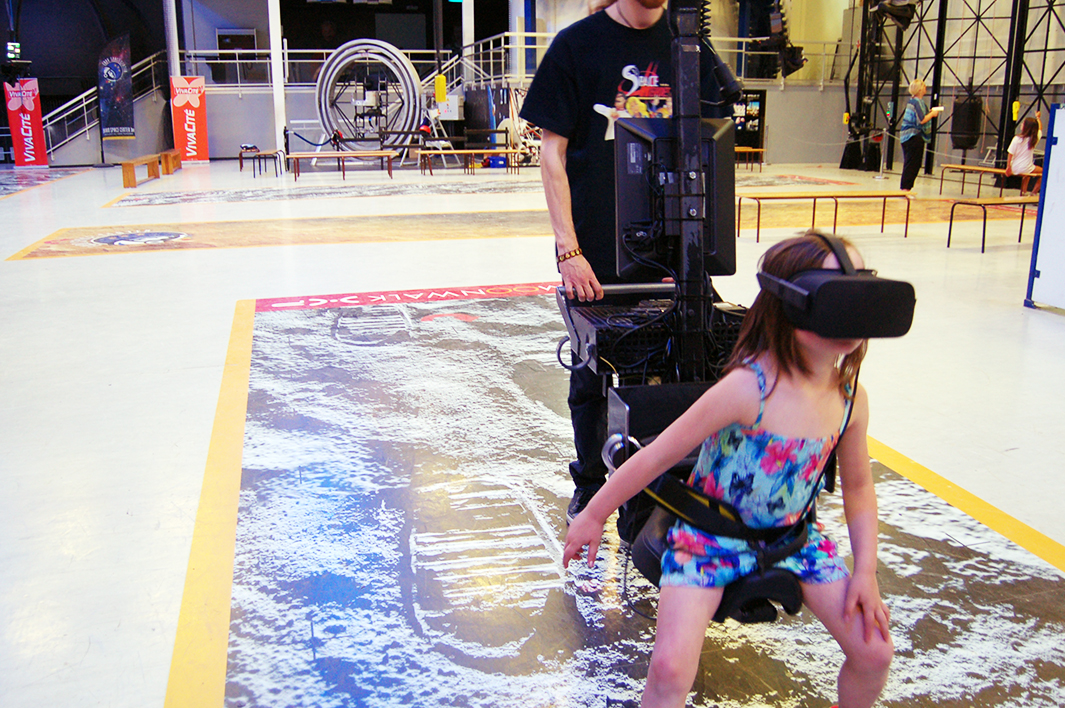 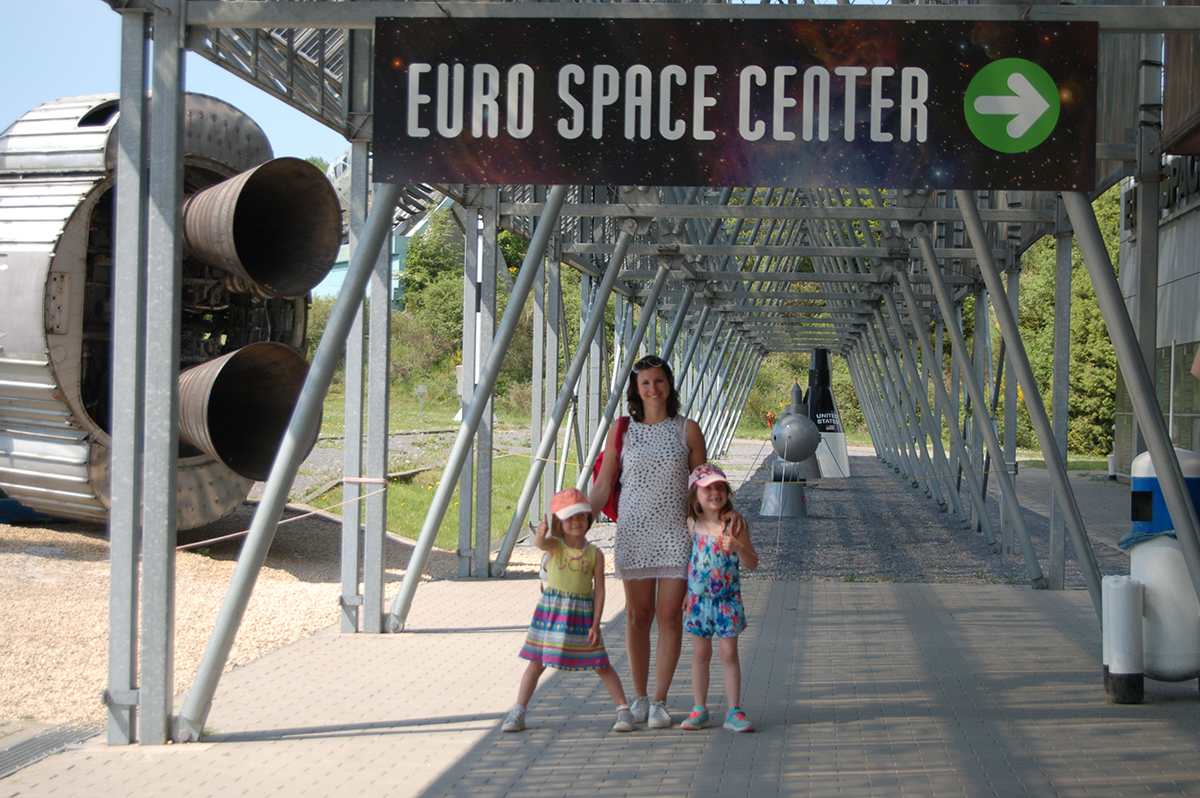 To end the day, we wanted to make a detour to Redu, the charming book town, before going back home, but we were all tired. So we took the way back and agreed that we will come back to this beautiful area! The walks of the Ardennes have a thousand shapes! Gourmet walks, sportier walks, walks on the RAVeL, the megaliths walk and even spacewalks! Space is a theme that fascinates many children and the Euro Space Center understands that. With its many educational and realistic simulations, our partner immerses people, young and old, in the heart of this magical world of space. If you want to plan a weekend in the Ardennes, do not hesitate to visit! I am not particularly passionate about space, but I really enjoyed this instructive tour that was rich in emotions. The girls, Elisa and especially Noelia, loved the experience and have already told their dad and their friends about it! 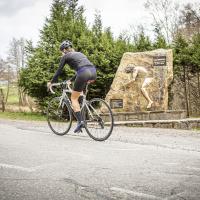 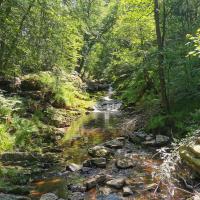 Beautiful walk in the valley of the Hoëgne
08 Mar 2021 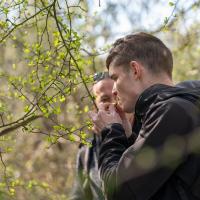 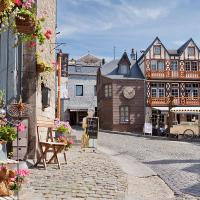 Family outing in Durbuy: our activity ideas with toddlers
13 Jun 2019 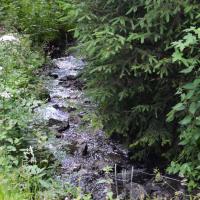 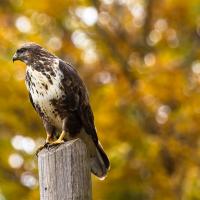 Conquering the treasures of the Ardennes
19 Mar 2019