The Belgian Ardennes have a lot to offer true beer enthusiasts. We compiled a list of essential stops in the region, all dedicated to the liquid gold. Cheers!

Beer Trail in the Belgian Ardennes

What do we have for our readers in this brand new dossier? A route through the beautiful Belgian Ardennes, completely dedicated to the most delicious beers. You have probably heard of them, the Trappist beers of Rochefort and Chimay, a fresh La Chouffe or a golden Malmedy Tripel.

For your convenience we laid out the different stops of our beer trail on a map in order for you to get a clear view of the places to be for every beer enthusiast visiting the Belgian Ardennes. 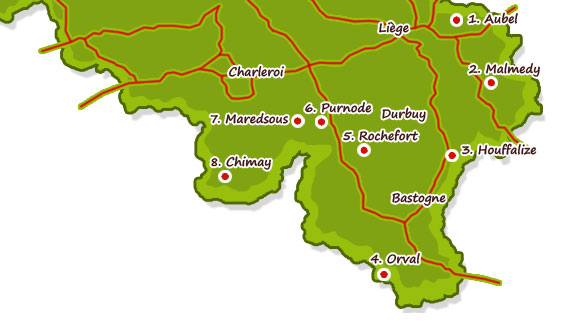 The Val-Dieu Abbey is located in Aubel, in the peaceful Land of Herve and has been destroyed several times throughout history. The brewery resumed its activities in the monastery in 1997.

What beers does the Val-Dieu Abbey offer?
- Val-Dieu Blond: lightly cloudy with a rich aroma and 6% alcohol;
- Val-Dieu Brune: dark beer with an aroma of malt, coffee and chocolate (8% alcohol);
- Val-Dieu Tripel: flavourful blond with an excellent balance between hop and malt, bitter and sweet, with 9% alcohol.

Enthusiasts were introduced in 2012 to the latest beer from the Bellevaux Brewery: the Bellevaux Tripel. This strong beer was supposed to meet the clients’ demand and succeeded brilliantly in its mission. The owners are true beer lovers and gladly show the visitors around, explaining the installations and the brewing process.

Feel like enjoying some fresh air in the region? The Bellevaux Brewery is located close to the High Fens nature park, the perfect spot for a hike.

The Achouffe gnome has become world famous. The Achouffe Brewery in Houffalize launched its first brew in 1982 and La Chouffe became a success. This Ardennes brewery is now exporting to over 20 countries in the world.

The Orval Brewery is located on the domain of the abbey in the province of Luxembourg, just a stone’s throw from the French border. It is home to the world famous Orval Trappist. The brewery can be visited during the annual open house days. However, visits are just as well possible in July, August and September, and the domain is great for a peaceful hike.

Production at the Orval brewery is restricted. The beers are not unlimitedly available in the shops. Profit made during the brewing activities is used for social projects and maintenance of the abbey and the domain.

Read more in part two of our beer route through the Ardennes.